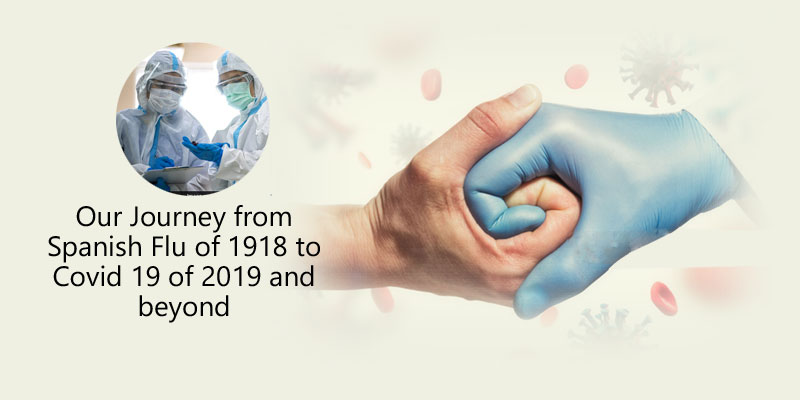 Our lives have been restricted & difficult over the last 16 months due to a never ending crisis that nobody seemedto have seen coming. Now that we are in 2021, our understanding & knowledge seems clearer and more retrospective in nature. This has prompted our research on various Pandemics that have hit us over the last 100 years, covering the likes of the Spanish Flu ( 1918 ), Asian & Hong Kong Flu ( 1957 & 1968 ) , AIDS ( 1981), SARS ( 2002 ), Swine Flu ( 2009 ), MERS ( 2012 ) and to compare their origination, effect & eventual fading away with the current Covid-19 ( 2019 and ongoing ) crisis. The objective of thise exercise has been to find the astrological combination that caused these pandemics and what did it take for the pandemic to go away.

This effort has been an eye-opener as well as an exercise in humility, as the pattern that emerged over a 100 years is clearly cyclical. Karma & destiny takes up roles that are inversely proportional to the level of humanity exercised by us.

Our findings are as below:

1918 - Spanish Flu : The crisis saw its first recorded case on 11th March 1918 in the USA. It was a pandemic that was the deadliest, recorded in modern history, continuing till April 1920. The origin of the Spanish Flu is said to be cross infection from mammals to humans called H1N1, as deduced by the scientists. Given the origin of such Virus, the evolution must have begun sometime in 1917. India was hit hard by June 1918 with a deadly wave during October – December 1918 period.

Astrology behind it: The Virus seems to have originated out of a Pluto-Ketu conjunction on 10th October 1917 in the sign of Gemini. Pluto is Karmic & displays unalterable fate while Ketu signifies sudden unexplained suffering, as well as organisms like Virus, which are difficult & cryptic in nature. The placement in Gemini sign is representative of the USA & therefore its origination & discovery in that country was not surprising. The actual pandemic seemed to have triggered off with a Saturn-Neptune conjunction ( both very cold & watery planets ) causing sudden filling up of lungs with fluids & body turning blue., The conjunction of Jupiter with Ketu pushed it to pandemic levels and gave it a Karmic level wiping off of millions of people from the earth. Our research team saw stark similarities between the combinations prevailing in 1918 & 2019, giving vital clues to the effects of Covid-19, which has currently paralyzed the world.

Asian Flu : Tthis was a sudden crisis that came up around the end of 1956, with the pandemic in operation during 1957 & 1958. The origin was China, but it was not reported since China was not a member of WHO back then. A vaccine for this flu was developed by July 1957. India suffered loss of 1 million human lives by June of 1957. Tragically, this virus was never eradicated & it mutated on to cause another crisis in 1968. The Virus was named H2N2 & was controlled by the second half of 1958.

Astrology behind it: This pandemic seemed to have been triggered off by a mutation due to Saturn's conjunction with Rahu in October 1956. Interestingly Rahu or Ketu are usually behind the birth of a new virus. The pandemic seemed to be controlled by mid 1958 but infections continued till 1968, when it mutated dangerously. Interestingly, the Saturn Rahu conjunction did not receive a closure due to which the next Saturn-Rahu conjunction of May 1968 got the Hong Kong Flu pandemic started .

Astrology behind it: Saturn & Rahu's conjunction first in 1956 & then in 1968 gave shape to two very dangerous & closely linked pandemics. The DNA of both the virus had the same origin, as were the planets responsible. Here the vaccine became available after the Jupiter Pluto conjunction of October 1968. However, due to close conjunctions of Jupiter & Ketu in December 1968 & May 1969 – the virus remained out of control till middle of 1969.

AIDS : HIV & AIDS came into limelight in 1981. This is one of the virus that still doesn't have a cure or a vaccination. The origin of this Virus have been traced back to around 1920 in the Sub-Sahara region.

Astrology behind it: : Given the fact that AIDS still does not have a vaccine & cure, it shows up with a conjunction of Jupiter, Saturn & Pluto in 1981, giving this a Karmic and fatal twist. Without any clarity on its origin, it remains an enigma & unconquered till date.

SARS : The first case was recorded on 16th November 2002 & it was a very rapid but short-lived crisis. By July 2003, it was said to be contained. The virus belonged to the same family as the current Covid-19 virus.

Astrology behind it:: The Virus seemed to have been pre-existing & it was a mutation that triggered the crisis. Jupiter's inflationary effect seems to have exacerbated it. The crisis ended as soon as Jupiter shifted its sign.

SWINE FLU: It was classified under H1N1 just like the Spanish Flu, but turned out to a smaller crisis due to the readily available vaccinations, healthcare & better immunity of the population that exposed to it. The crisis lasted from January 2009 to August 2010 after which it was said to be contained. The virus seems to have infected humans between June – November 2008 period.

Astrology behind it:: Given it had the same DNA as the Spanish Flu, it is not surprising that the players were the same. Saturn's conjunction with Ketu seemed to have given it birth, while Rahu's conjunction gave it the flare up. The virus turned into a pandemic when Jupiter joined the combination & died down once Jupiter moved it sign.

MERS: This Virus originated around November 2012 & is believed to have infected the humans from camels. The virus is similar to Covid-19 but thankfully even though it is not eradicated, it never became big global threat.

Astrology behind it: : This seemed to have originated like Covid-19 but the players were relatively benign. Jupiter & Ketu's conjunction started the pandemic but without the role of Saturn or Neptune ( as it was a hot region & so cold planets did not figure here ), this never really became a major problem, thankfully.

Based on the historic research our team went ahead & carried out a research on Covid-19 virus.

COVID 19 : The first recorded case came from China, somewhere in November 2019 & had been since classified as SARS-CoV-2, similar to the SARS virus of 2002. However, the astrological origin seem closest to the Spanish Flu, the Asian Flu & MERS.

Astrology behind it:Astrology behind it: On deeper analysis, the genesis of the virus seems to be somewhere in April & May 2019, when Saturn, Pluto & Ketu were in the sign of Sagittarius ( Modern China's sign ). The Saturn – Ketu conjunction gave birth to a mysterious and dangerous virus and Pluto made it into a Karmic change for the entire world. The virus got its fuel for growth when Jupiter joined this conjunction in November 2019 and the first cases came out. A 7- planet conjunction on 26th December 2019, along with a solar eclipse, made the destiny of the virus strong enough to create history. Thereafter Saturn's conjunction with Pluto on 13th January 2020 & Jupiter's conjunction with Pluto on 29th march 2020 sealed the fate of the entire world.

Predictions & Analysis for the Future:

After creating much havoc in 2020, it seemed that Covid-19 had settled a bit. But, little did we anticipate the second wave that is devastating India currently. Based on our research, we believe this can be explained by:

Movement of Jupiter in Aquarius (an air sign), and directly influencing Mars in Gemini, which is also an air sign.

The Jupiter with its DNA acquired from 2019 has the ability to damage. Further our research about the 2nd & 3rd wave of Spanish Flu, SARS in 2002, Swine flu in 2009 shows that such new waves come in with Jupiter being in similar position. Jupiter is in an air sign since 5th April 2021 and is influencing Mars in Gemini (also an airy sign), causing the crisis due to oxygen deprivation in our country.

When can we expect relief and what does the future hold:

Our competent Vedic astrologers use millions of permutations & combinations to answer any of your questions under the sun. Try now