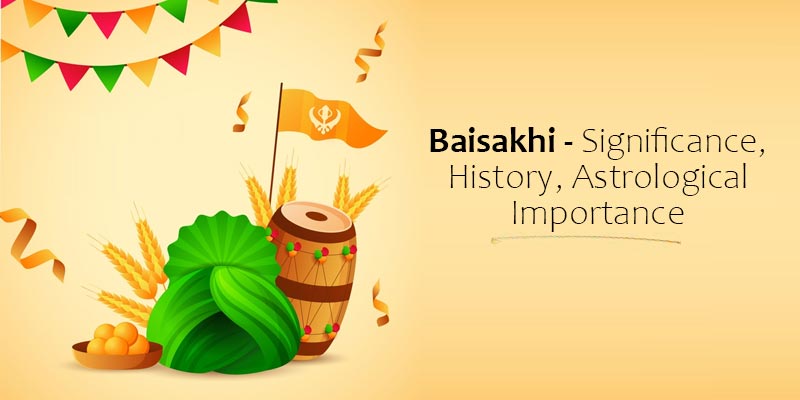 Baisakhi, also known as Vaisakhi is celebrated among the Hindu and Sikh communities in India. Baisakhi marks the astrological New Year for the Hindus, and holds a great historical, cultural, and agricultural importance for the Sikh community in India.

This year, Baisakhi will be observed on 13th of April 2021. Baisakhi is the spring harvest festival that is celebrated on 13th or 14th of April every year. However, it falls on the 14th of April once in every 36 years, as the date is calculated according to solar calendar.

Astrologically, the Baisakhi date has a prime significance, as this day marks the entry of Sun in the Aries sign or Mesha Rashi. Therefore, it is observed as Mesha Sakranti in the Hindu community. The word Baisakhi is originated from Baisakh, the first month of the Bikram Sambat of Hindu calendar. This auspicious day is celebrated under different names and religious rituals all over the states of India as-“Rongali Bihu” in Assam, “Naba Barsha” in Bengal, “Puthandu” in Tamil Nadu, “Pooram Vishu” in Kerala and “Vaishaka” in Bihar.

On the day of Baisakhi in the year 1699, the tenth Guru of Sikhs, Guru Gobind Singh, founded the Khalsa Panth where all Sikhs who were ready to join Khalsa (pure) were baptized. These Gurus underwent the Amrit ceremony, where all pledge together to give up alcohol/tobacco/intoxicants. Those who undergo Amrit ceremony have to follow a strict vegetarian diet regime and lead a simple life style without removing hair from their body.

Another significant event in the Indian history that is related to Baisakhi is the Jallianwala Bagh massacre. On 13th April 1919, the troops of the British Indian Army under the command of Colonel Reginald Dyer fired bullets into a crowd of civilians, where mostly Sikhs, who had assembled at the Jallianwala Bagh to participate in the annual Baisakhi celebrations, became the victims of this massacre.

Baisakhi marks the ripening of the Rabi crops and is celebrated with great fervor among the people in Punjab. It is Thanksgiving Day in these states where farmers the dress in new clothes and visit Gurudwaras to express their gratitude to God for good harvest, and pray for favourable weather to help crops grow and produce. High point of this festival is the performance of traditional folk dance Bhangra and Gidda by men and women respectively.

Sikhs begin Baisakhi with a visit to the Gurudwara, their place of worship. Many people visit Golden Temple (Shri Harminder Sahib) in Amritsar, where the holy book of Sikhs “Guru Granth Sahib” is placed on the ceremonial chair, and read with a Chauri waved above it. The holy book is then taken out in procession for Nagar Kirtan. There is a lot of singing, dancing and chanting of hymns. Sikhs gather at Shri Anandpur Sahib, the place where Khalsa Panth was founded. Khalsa Panth is recited here on the auspicious day of Baisakhi.

Baisakhi marks the importance of growth and sacrifice in Indian history. It teaches us about enduring through dark and difficult times, and holding on long enough to find an opportunity to re-emerge, by keeping a strong faith on our religious and spiritual Gurus.