Venus's transit in 2023 will offer you consistency and positive change, while Mars, Rahu, and Saturn's influence will help you in realizing your full potential, which will create the cornerstone for your future days. Due to the Mars-Venus conjunction occurring twice in 2023, Jupiter's movements will provide possibilities for you to discharge your own karmic debt as well as that of others. You would benefit from the support of Sun's guidance toward duty (dharma) and new beginnings, which will help you face the problems that Mars would present during the year. Saturn's impact on Rahu and Jupiter would require space in your relationships and a need to get out of your negative thoughts from the second quarter of 2023 to the end of the year.

You would also have the opportunity to reflect at this time since conflict and buried information would surface. Because Rahu and Ketu will switch Nakshatras after 36 years, and it will be the time for good or bad karma to be repaid, expect some major changes around the end of the year. To make the most of 2023, be adaptable, perseverant, and persistent.

2023 Love Astrology predicts some very wonderful marriage proposals as well as chances for you to begin a new romantic relationship. There will be romance in your love life. According to predictions based on Saturn's movement, love will advance in a way that will change people's lives. Saturn will be in your sign from 23 January 2023 to 17 June 2023, giving you a trustworthy companion. However, in order to succeed in your romantic endeavors, you must put out sincere efforts and dedication.

Your love and marital life will have ups and downs, difficulties, and misunderstandings due to the Rahu/Ketu axis. Due to a troubled relationship, you can continue to feel nervous and unhappy from 14 April to 15 May 2023. Saturn's retrograde in the house of love beginning on 17 June 2023 will cause discord and misunderstanding in your relationship. There is a probability of separation during Jupiter's retrogression from 4 September to 31 December 2023. Achieving harmony requires avoiding pointless debates and ego confrontations. Toward the end of 2023, with your sincere effort and sensible approach, you will encounter events that will change your life for the good.

According to the 2023 Money & Finance Astrology, Jupiter's position from 1 January to 22 April 2023 will offer you optimistic financial views that will help in debt repayment. Saturn's position from 17 January to 17 June 2023 will be favorable for your long-term investments. You will have financial security thanks to this placement, and you will discover a variety of profitable investment opportunities. From 1 January to 30 October 2023, the Rahu and Ketu axis will make it difficult to make financial judgments. Rahu will be in conjunction with Jupiter from 22 April to 4 September 2023, and this conjunction will be advantageous for your financial situation. You'll be able to earn from your stock market and investing activities.

Venus will be in a favorable position for you in January, bringing you a lot of clients and fame for your company. You must use caution with your family's finances and investments from 30 October to 31 December 2023. Your financial situation will see some difficulty in the first quarter of 2023, but eventually things will turn around. The transition of Mars on 10 May 2023 may bring luck and improve your financial situation.

Your career ambitions might encounter a few obstacles this year, but if you manage them patiently, they will lead to slow but certain progress in 2023. Due to Jupiter's blessings, new job prospects may come your way through well-known contacts; yet, Saturn could cause delays in the advancement of your endeavors. At the beginning of the year, Jupiter will be placed in its own sign, Pisces, in the sixth house. Jupiter will enter the 7th house on 22 April 2023, bringing you a variety of prospects for professional growth and achievement with recognition all year long.

Your career prospects will be delayed by Saturn's transition until the first half of 2023, but Jupiter's backing will help you get through it. However, innovation and partnership will give your career prospects a boost. Strong career planning can assist you provide yourself a competitive edge over others' professional possibilities in addition to completing any pending work. Overall, according to the current career situation, 2023 career astrology predicts a fruitful period in which the blessings of Jupiter will bring opportunities and the transition of Saturn may slow you down to review your resources and proceed slowly, and the blessings of Venus could make you a more skilled and refined career professional.

Due to Mars' retrograde movement in your 8th house and Jupiter's less favorable placement in your 6th house, the first half of 2023 may see some physical setbacks in your health. Children will have to work hard and overcome obstacles in order to advance academically. This year will begin with difficulties in the family, but Saturn's entry into the fifth house of love will revive the warmth in relationships. The second half of 2023 is predicted to be balanced in terms of your health, family, and children according to your astrology, as your family ruler Mars will be in the 11th house of gains with Mercury and Venus, which might lead to better communication and happiness within the family.

Mars is the ruler of the family house, and when it forms an aspect or conjunction with another planet, it shows general development despite brief obstacles. In the month of May, Jupiter will join Rahu in the seventh house, which might temporarily cause conflict in the marriage and the job. After 30 October 2023, Rahu will move into your sixth house, giving you more courage in your undertakings and an easier time defeating your competitors. The progressive Saturn in the house of love and children will require you to be patient as you examine their entire improvement. You may make an informed choice about yourself by modifying your lifestyle through the practice of yoga and meditation thanks to Jupiter's placement in the 7th house of partnerships and its aspect over the ascendant. As both your personal planet, Venus, and your family lord, Mars, will be situated together in the second house, bringing semblance to your relationship with patience in the latter months of the year, your family front will be defined by pleasant connections.

Libra is the beginning of autumn, the time of equilibrium between the length of days and night, the balance between light and darkness within us. Just as the autumn tree struggle to shed leaves, Libra finds it hard to let go of their relationships. Libra acknowledges the fact that we thrive among people, and without relationships, all that remains is bare branches, no liveliness. Libra is symbolized by the scales, represents the need for balance. Libra tend to be fair-minded and sensible people, who view the situations from different angles and find a middle ground where the opposites collide happily. This Libra reading is based on Moon Sign, a very important astrological mark to know your future. Are your a Libra Moon Sign? You can find it out instantly.

Their mascot is the only inanimate object in the zodiac wheel, which represents that Libra tend to live life as an abstract concept than a living thing.  Moon gives Libra emotional intelligence, these compassionate beings act as a source of light into the dark souls of others. But they also tend to become people pleasers and adjust their opinions to suit the situation. They have an intrinsic fear of losing their relationships, thus compromise on their ideals and opinions to strike a chord. They often end up with a bleeding heart.

The most compatible signs for Libra are those who can offer a balance of intellect and emotions, and are sociable too such as Gemini and Aquarius. Venus, your governing planet blesses you with an eye for beauty, thus art appeals to you and so does the idea of ideal love. You are an air sign, thus a little unpredictable and changeable as the air. Your emotional reactions often waver between being swift or utterly still as the unsettled air. The cardinal quality helps you be the initiator of solutions to problems that people find difficult to comprehend.  Your objective, rational and justice-seeking approach wins hearts. You have the art of tact, thus can be diplomatic when situation requires. Your initiation is a product of your power of persuasion. Your biggest virtue is your ability to be the go-between. You are a problem-solver and a peacemaker, the one who seeks to balance things. Your biggest woes include your weakness to fall victim to procrastination. You escape situations when you have to confront, as you do not want to go against someone or hurt someone’s feelings. This makes you appear undependable. 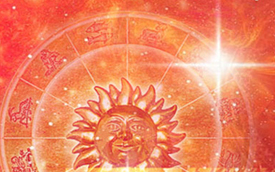 2023 Horoscope prepared under the supervision of Pt. Onkarnath will offer you a 'complete & personal guide' to the events expected in your life in the year 2023. This report, as prepared on your date, place & time of birth will bring you the update on the events & occurrences...more

Overview This month is brimming with boldness and self-assurance. As a result, you will progress in your career and get respect at work. Venus is exalted as of 15 February, thus you will succeed despite numerous obstacles and misunderstandings. You should be careful with your financial decisions if you don't want Mars' placement to cause you distress. Try to cut back on your expenditures this month for a brighter future. If you're a politician, this month will go well for you. You might be interested in visiting and reading about spiritual and religious places. There are various opportunities for success and income. Mercury will be in Capricorn from 7 to 27 February, thus overseas travel and business meetings will increase and be... more

Libra 2022 horoscope shows that this year will be full of enjoyment and entertainment. You will get good results in the field of education, career, and health. Your love partner and you will enjoy a pleasant love life during 29 April - 12 July. more