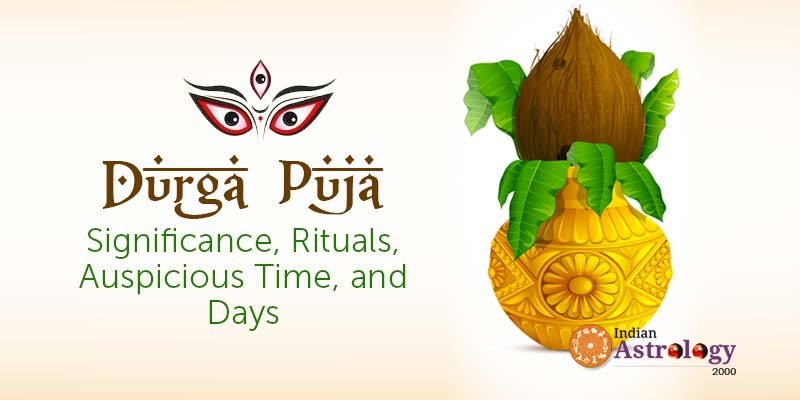 Durga Puja is the most popular festival among the Bengali community and is celebrated with great enthusiasm and joy in all part of India. Popularly known as Shardiya Navratri, mostly in Northern and Central India, this festival marks the time when Goddess Durga ascends on earth, her parental home, from Mt. Kailash. This festival illustrates the victory of good over evil.

This festival is celebrated each year for 10 days in the month of Ashwin (September-October), but the main festival commences on the 6th day of this Navratri period. In this year, Durga Puja will start on 7 October 2021, which is first day of Navratri and end on the 15th of October, the 10th day of Navratri. The first day of Durga puja is called Mahalaya, which is the day when the clash between the demons and deities took place and Goddess Durga was summoned to win the war in favour of the Gods and Goddesses.

On Durga Puja each year, Goddess Durga ascends on earth along with her 4 children – Ganesha, Kartikeya, Lakshmi and Saraswati, to visit her parental home, from her bridal home in Mt. Kailash, where she resides with her husband, Lord Shiva. In a way, this journey of Goddess Durga is considered as the annual homecoming.

Idols of Goddess Durga are erected in Pandals in a grand scale where she is worshipped in her demon-slaying position. She is accompanied by her children on both side and her husband, Lord Shiva, overseeing from above. All the deities are mounted on their animal carriers and together forms a beautiful family portrait/idol, which is reverently worshipped.

The five days of Durga Puja are celebrated with pomp and show – Shashti, Saptami, Navami, and Vijaya Dashami. Each day has its own significance and meaning.

The five days of Durga Puja are observed as follows:

On the 6th day of Navratri, as per mythology, Goddess Durga comes on this earth with her four children – Goddess Saraswati, Goddess Lakshmi, Lord Ganesha and Lord Kartikeya. On the evening of this auspicious day, the face of idol Durga is unveiled, and rituals are performed where ‘dhaak’ or cylindrical drums are beaten to bring positive vibrancy and strength.

On this auspicious day, the Maha puja is performed. At sunrise, a Banana tree is submerged in holy water and then adorned in a new sari as is worn by the newlywed women. This ritual is called ‘Kola Bou Snan and Puja’.

On this auspicious day, it is said that Goddess Durga executed the Demon Mahishasur in the battle between the demons and deities. Prayers and flowers are offered to the Goddess on this day during ‘anjali’. Anjali means offering flowers and reverence to the deities. This ritual is considered very holy. Girls younger than 9 years are represented as the incarnation of Goddess Durga and are worshipped with reverence. This ritual is called the ‘Kumari Puja’, which is followed by the Sandhi Puja. Sandhi Puja is a lengthy ritual which often spills into the next day, Navami.

After the Sandhi puja ends, the auspicious day of Maha Navami begins where on the evening of ‘Maha Navami’- Maha Aarti of Goddess Durga is performed with lots of excitement, pomp, and show. It is believed that the 9th form of Goddess Durga keeps us protected and safe from fear, disease, and anxiety.

Vijay Dashami is the last day of the festival of Durga Puja and Navratri. Women apply and perform ‘Sindoor Khela’, where married women apply the red vermillion on the Goddess and on each other. The festival culminates with the immersion of the Goddess in the river Ganga preferably, which is known as ‘Ghat Visarjan’. This ritual includes taking out a procession, where the idol of the Goddess is carried by the devotees on the trucks, along with the beating of dhaks and drums, accompanied with singing and dancing which brings an end to the Puja Rituals.

The end of this festival brings the hope of celebrations for the next year once again and devotees and enthusiasts starts to await the return of Maa Durga to her earthly abode. These few days of festivals brings in positivity, warding off any negative vibe, strength, and hope for the win of good over evil always.