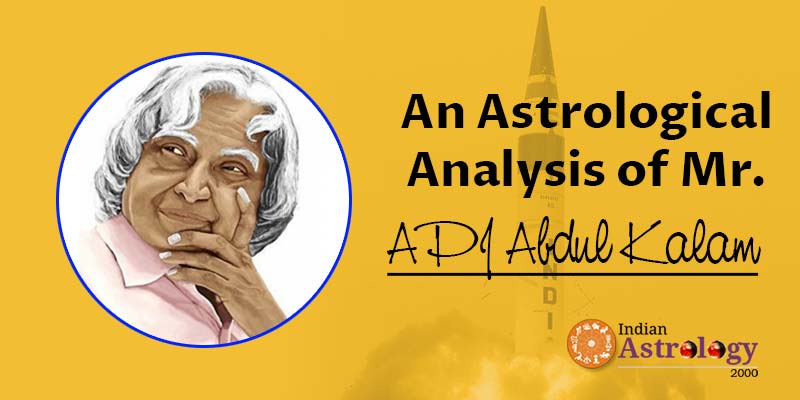 Mr. APJ Abdul Kalam was born on 15th October 1931 in a small coastal village in South India into a very poor family. He was a multifaceted personality who with his sheer willpower and determination, threw away the shackles of poverty and gained education and eventually a better standard of living. He became the light of inspiration to millions of aspiring natives and the most favorite and promising President of India. He was one of the brilliant Indian scientists whose diligent efforts were visible behind India’s Nuclear weapon program.

Mr. Kalam was born in the Saturn Nakshatra [Anuradha] which is the lord of the 7th house and 8th house and posited in the 6th house of debt and obstacles, so it endowed him with hard and harsh childhood.

Jupiter in the ascendant in its exalted sign in the nakshatra of Mercury and has the lordship of 6th and 9th house. So, Jupiter activated both the house of finance and service - 2nd and 6th house by its aspect which urged him to earn at a very young age.

The entire student life of Mr. Kalam was under the influence of Mercury and Mercury is exalted making a Budh-Aditya with Sun in the 3rd house. The planet of education Mercury and Jupiter both aspected the 9th house of higher education and exalted Jupiter aspect which made him capable of completing his graduation with ease despite so many adversaries.

The events and the things were moving at a normal pace in his life for overall prosperity. The 4th house lord Venus placed in its own sign gave him a boost and recognition during its own dasha period and his initiative became strong to work hard with efforts to pursue his aspirations.

Astrological combination that triggered his death in the year 2015:

The astrological combination that affected his death trail was that Saturn was in conjunction with Moon in transit which compelled the 8th house of death to be activated. The aspect of the transit Ketu on the transit Saturn again highlighted the 8th house of death and Ketu is the planet of salvation and placed in the nakshatra of Moon triggered his death events more profoundly accompanied by Venus which was placed in the 2nd house that is called the badhak house, which supported the events for Mr. Kalam death.

Mr. Abdul Kalam was a man of substance with good technical knowledge and good communication, but a man of few words. He worked for the development of India with compassion for humanity.