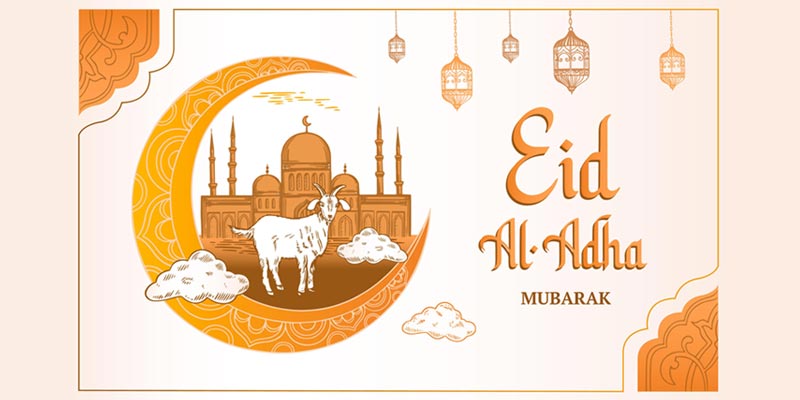 Eid-ul-Adha, popularly known as Bakhri Eid is a religious festival of the Muslim community, all over the world. This Eid is also known as the ‘Festival of Sacrifice”. The festival falls on the 10th day of Dhu al-Hijjah, which is the last (12th) month of the Muslim lunar calendar.

Depending upon the sighting of the moon, the date of Eid is declared. In 2021, Tuesday July 20 will mark the commencement of this festival.

The day honours the courage and dedication of Prophet Ibrahim. It is believed that he was tested by the Gods and was asked to sacrifice his only son. Plagued and saddened by the command of God as he was, he was still a dedicated believer and had his own faith. Following the orders of God, he became ready to sacrifice his own son for the greater good. However, at the altar, God intervened and offered a lamb to be sacrificed instead of Prophet Ibrahim’s son.

To celebrate this act, Muslims acknowledge Ibrahim's devotion and celebrate Eid-ul-Adha annually. On this day, it is marked by sacrificing a lamb or an animal, which is later divided into three parts. One part of the share is kept for home and the rest two shares are given to the poor and needy.

Significance of the day:

Eid ul-Adha marks the culmination of the hajj (pilgrimage) rites at Mina in Saudi Arabia, near Mecca, but is celebrated by Muslims throughout the world. It begins on the 10th of Dhū al-Ḥijjah, the last month of the Islamic calendar, and continues for an additional three days. During the festival, families that can afford to sacrifice a ritually acceptable animal (sheep, goat, camel, or cow) do so and then divide the flesh equally among themselves, the poor, and friends and neighbours.

After the Eid Salaah (Eid Prayers), which are performed in congregation at the nearest Mosque on the morning of Eid, the act of Qurbani (sacrifice) is carried out. The act of Qurbani consists of slaughtering an animal as a sacrifice to mark this occasion in remembrance of Prophet Ibrahim’s sacrifice for Allah. This is also known as Udhiya. The days of animal sacrifice total three days, from the 10th to the 12th of Dhu-al-Hijjah.

Eid al-Adha is also a time for visiting with friends and family and for exchanging gifts.

Muslims around the world offer Eid-ul-Adha prayers at the mosque after sun rise and just before it enters the Zuhr time (midday prayer time). The prayer is followed by a sermon or khutbah, by the Imam in the mosque. Eid al-Adha is also a time for visiting with friends and family and for exchanging gifts.

The day starts with people wearing new clothes, exchanging blessed wishes and greeting each other by saying ‘Eid Mubarak’ which means ‘have a blessed Eid’. They all share sweets with each other and children receive gifts and money from elders which is called Eidi.

The female members of the family prepare elaborate dishes for everyone to savor. There is a lot of variety of food items made on this day to mark its celebrations with the preparation of dishes like-Biryani, Haleem, Nihari, kebabs, and desserts like –Seviyan.

Charity is one important aspect of Eid, which is one of the five Pillars of Islam (Zakat). It involves giving food or alms (in this case the Qurbani from earlier in the day) to the poor and the downtrodden as a benevolent act of kindness.