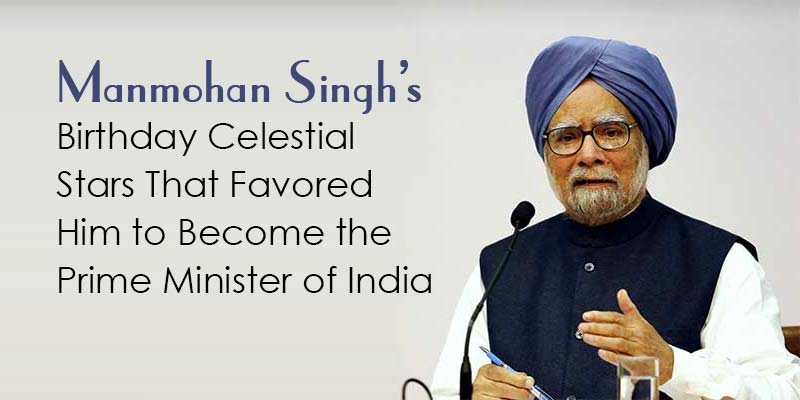 Dr. Manmohan Singh is a very reputed personality with a strong tread of immense capabilities. He is an erudite economist, politician, and former Indian Finance Minister. He is a reputable figure in Indian landscape and India’s one and only Sikh who had graced the portfolio as the Prime Minister of India for the tenure of 2004 to 2014. Dr. Manmohan Singh introduced a new era of reform in the year 1991 in the arena of economics and finance and India became familiar with new terms of liberalization, privatization and globalization. His vision of opening up India to the world market made him very popular and famous.

On the occasion of the birthday of Dr. Manmohan Singh, we will try to generate some interesting facts about his planetary configurations in his horoscope, which blessed him with such great intelligence and power.

-The birth ascendant of Mr. Singh is Sagittarius and the Lord of Ascendant Jupiter is placed in the 9th House with Ketu in his Natal Chart. Jupiter the ruler of the ascendant in Leo with Ketu is correlated with luck in general and long distance travel. Dr. Manmohan Singh, Indian Economist and Former Prime Minister had to often travel abroad for political meetings.

-Cancer Moon sign and the placement of Moon in its own sign made him compassionate towards common man. The conjunction of the Moon with Mars and Venus gave him good public response and strong mass appeal and this combination generated the Chandra-Mangal Mahalakshmi Rajayoga, which blessed him with immense wealth.

-Mercury is the planet of intelligence and the conjunction of an exalted Mercury and Sun in his 10th House of power, status, profession forms a Budh-Aditya Yoga which is one of the most prominent reasons of him to be endowed with great power and progress in politics.

- Sun, the lord of the 9th house of fortune and posited in the 10th house of career forms a Raj yoga in itself as Sun placement in the 10th house makes it stronger due to its directional strength. So the Sun-Mercury conjunction, which happens to be a conjunction of the 9th House and 10th House lords, paved successful results to Dr. Singh in his political career throughout his tenure. This combination is responsible for his successful tenure from 2004-2014.

- Saturn is in Capricorn and it has the lordship of the 2nd house of wealth and the 3rd house of efforts, which shows that he is a person who religiously believes in the concept of hard-work and discipline. He had the vision of economic reforms and policies for India’s benefit. Hard taskmaster Saturn is retrograde in its own sign Capricorn, which is linked with finance and family and this supported him to become a learned economist.

- Sun and Mercury stationed in the 10th house of career and power worked well for Dr. Singh to climb up the ladder of success in politics. He became the Prime Minister of India on the 22nd May 2004 when he was running through the Main period of Rahu and Sub-period of Saturn. Both of these planets are well posited in his natal horoscope and these two planets become functional benefics and overnight he was declared as the Prime Minister of India unanimously.

-Moon is in its own sign Cancer along with Venus and debilitated Mars. All these planets are stationed in the eighth house which is in opposition to retrograde Saturn positioned in the second house. This position leads Dr. Manmohan Singh, Former Prime Minister to formulate sound strategy to achieve his objectives which were the basis of his long term reigning tenure in politics.

All these planetary configurations made Dr. Manmohan Singh one of the most talented economist reformers and a great Prime Minister of India.