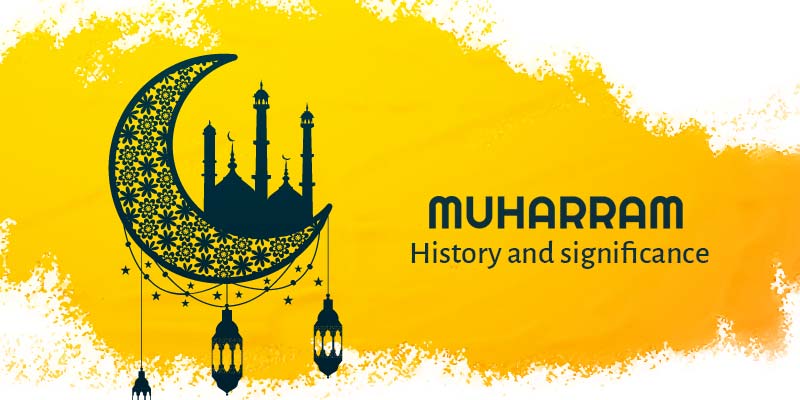 The festival of Muharram marks the first month of the Islamic Calendar. Muharram is one of the most significant festivals celebrated by the Muslim community in India as it marks the beginning of the Islamic New Year. This festival is particularly common among the Shia community of Muslims across the world.

The month of Muharram is one of extreme grief as it mourns the death of Hazrat Imam Hussain, the grandson of Prophet Muhammad. The month of Muharram, although known for its period of mourning, is considered one of the holiest according to the Islamic Calendar.

The Muharram celebration goes on for a period of 10 days. The 10th day of Muharram is known as the Day of Ashura, which has a rich and tragic history associated with it. Shia Muslims observe it as a day of mourning to commemorate the death of the grandson of Prophet Muhammad. According to the legends, fourteen centuries ago, on the day of Ashura, Harzat Imam Hussain was captured and brutally killed by a cruel and oppressive ruler in the Battle of Karbala. Although Imam Hussain was slain in the battle, his message of kindness, justice and equality lives on among people who love him, and hence, that is his real victory.

The tragic story behind Muharram goes, that on the 10th day of Muharram month, the fierce battle of Karbala took place. It is believed that Hussain protested against the merciless rule of Caliph Yazid and led a revolution against him. In the battle fought between a small group of supporters of Hussain against a much larger army of the Caliph led to the capture of their leader Hussain. For several days, he was tortured and his men were deprived of water and food in the desert, eventually beheading Hussain and his little son.

It is a very emotional story and Muslims honour the sacrifice of the innocent lives by observing a mourning period in the month of Muharram.

The month of Muharram is one that is very tragic and yet is considered one of the most holy months of Islamic calendar. The Shia Muslims mourn the death of Hussain and his family and spend the day in mourning and sorrow. People respect their sacrifice and pray in abundance as well as refrain from all joyous events.

The period of mourning starts from the first day of the month of Muharram and continues up to the tenth day. The Shia devotees mourn by putting on black clothes, observing abstinence and by fasting. They break their fast on the day of Ashura, the 10th day.

On the 10th day, dressed in black, they attend special prayer meetings at mosques and other public places. The followers take part in chants while whipping their chests as a way of remembering the sacrifice of Hussain. Gatherings of Shia people take out street processions where they walk barefoot, chanting and whipping their chests until it draws blood. This is done as an act of repentance as well as mourning. The Day of Ashura is also a symbol of struggle against injustice and oppression.

There is a difference between how the Shia and the Sunni sect observe the day of Muharram. Whereas for the Shia Muslims, this day is one of sorrow and mourning, where they refrain from celebrating any joyous occasion, for the Sunni Muslims however, this day is celebrated with peaceful fasts which lasts from sunrise to sunset. Sunni Muslims observe this 10-day period as a time of fasting as they remember the victory of Moses over the Pharaoh of Egypt. This period of fasting is voluntary and it is believed that the people who fast, will be rewarded by Allah.

This day is often a public holiday in India, keeping in mind the sentiments of our Muslim brothers and sisters. Though not a joyous festival, this event is one of the most important occasions that are observed by the Muslims in India and also all over the world.