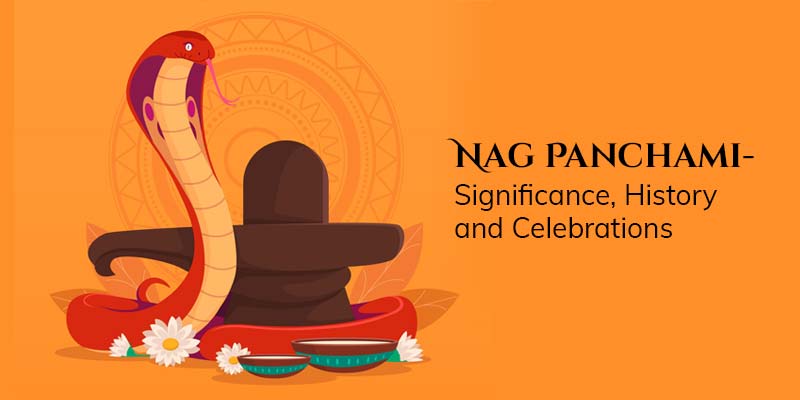 On this year, Nag Panchami will be celebrated on 13 August, 2021. During the month of Shravan, it is typically considered as monsoons. There is extreme rainfall and this causes the snakes to come out of their dens and burrows, since their hideaways get filled with the rain water. According to popular belief, this festival is dedicated to the snakes so that they do not hurt humans in the process.

There are many legends that are associated with the celebrations of Nag Panchami. As per the most popular belief it is celebrated as a form of Lord Krishna’s victory over Kaliya Naag in River Yamuna. In this way he had saved the lives of the Gokulvasis. Since then, the festival of Nag Panchami is celebrated every year.

Worshipping snakes in Hindu culture holds greater importance as even Lord Shiva carries snakes around his neck like a garland. The second popular belief is about Sheshnag of Lord Shiva. It is believed that the entire earth is balanced on Sheshnag’s back. People worship the snakes on this day to ensure their families are protected from the danger of snakes.

Another legend goes that when Takshak, the king of snakes, stalked and killed King Janamejaya's father Parikshit, to avenge his death, King Janamejaya conducted a yajna to eliminate the entire Naga caste. On the day of the yagna, due to the intervention of the Brahmin Astika Rishi, the Yagna was stopped. And since then, this day began to be celebrated as was the day of Nag Panchami.

It is said that observing fast on this day offers protection against snake bites. On this day, people make snakes out of clay, giving them different forms and colours. These serpent models are placed on a dais and offered milk. They are prayed to and offered flowers, sweets, fruits and an abundance of milk.

Paintings of 'Nag' should be drawn on either side of the entrance of the home and worshipped. Known as 'Bhitti Chitre Nag Puja', women offer food, laddoos and kheer to Brahmins. Similar food is also offered to snakes and snake charmers.

It is believed that on Shravan Shukla Panchami, the women who will worship a snake, shall be protected for seven generations. Also, on this special day, people influenced by Kaal Sarpa Dosha of Rahu and Ketu should also worship 'Ashta Nag' with 'Sarpa Sutra' and 'Nag Gayatri' to get rid of ill effects of this Dosha.

It is believed that snakes are fed milk on this festival and that apparently holds importance. An important story about feeding milk to snakes goes back to the Samudra Manthan. A deadly poison named Alakatoom erupted from the ocean while the devas and asuras were busy in the quest of finding amrit. The posison had the power to wipe out the entire universe. Lord Shiva drank the poison in order to save the universe. While drinking, few droplets fell on earth, which were consumed by the snakes. The Devtas performed the Ganga Abhishek on Neelkantha and snakes in order to calm the effect of poison on them. Hence, Nag Panchami is the representation of this entire mythological process.