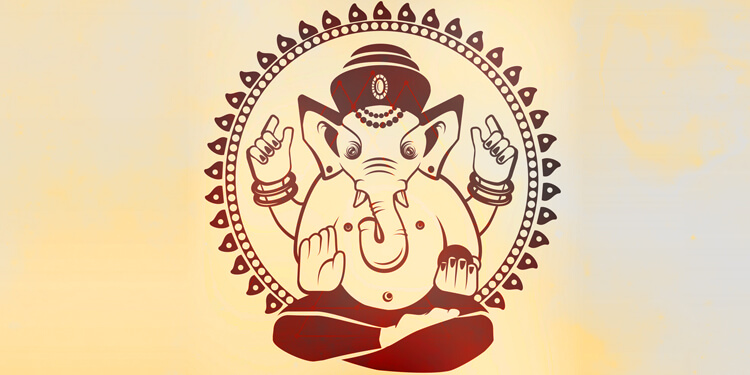 Ganesha, the Elephant Headed God is recognized as Vighnaharta - the one who removes obstacles from all fields of life. His elephant head signifies an intellect incomparable to all other deities. This is the reason he is designated as the God of learning and wisdom, and given the task of writing Mahabharata by Ved Vyasa.

Did you know Lord Ganesha is the first deity to be worshipped during any religious ceremony in India?

Irrespective of the sect (Vaishnaism, Shaivism, Shaktism, Smartism) one belongs to, Lord Ganesha is the first deity to whom the prayers are offered by devotees.A popular verse in Ganapati Upanishad events the arrival of Ganesha soon after the destruction of ‘current materialistic world’ and before the subsequent beginning of a ‘new creation’.

Translation: One who is born before the creation of nature and the consciousness

The mythological story behind the Elephant God

Ganesha, being the first deity to be born in every materialistic creation, naturally becomes the first choice of worship for all. Hence, he is “prathma poojya”- the one who is worshiped before all the deities and can drive away all impediments in execution of devotional services. You must have heard, many a times, the pundits or priests chanting ‘Om Gam Ganpataya Namah’ (ॐ गम गणपतये नमः) before the beginning of an auspicious task.

Lord Ganesha is the son of Parvati ( the manifestation of Supreme Power) and Lord Shiva (the Supreme Teacher). Goddess Parvati created the body of Ganesha out of the sandalwood paste that she used for her bath and then infused life in it. One day, when Shiva was away on his meditative wanderings, Parvati directed her son to guard the bhavan (home) while she bathed. Out of the blue, Shiva returned home early and found the boy guarding the main dwar (gate) of bhavan, and claiming to be Parvati’s son. This outraged Shiva’s impudence and he called his gang of ganas (the followers), who fought ferociously with the boy. However, the young boy easily held his own against such fearsome adversaries and Lord Vishnu was forced to intervene in the form of ‘Maya’ . Wwhilst the boy was distracted by her beauty, Shiva cut off his head.

When Parvati learned of this commotion, she got enraged and felt insulted that she criticized Shiva for killing their son and decided to destroy the entire Creation. All the Gods (including Lord Brahma - the Creator), appealed her to reconsider her hard decision. Goddess Parvati said she would take back her decision only if two conditions were met: first - Ganesha be brought back to life, and second - he should be forever worshipped before all the other Gods.

Repentant, Shiva realized his mistake and agreed to Parvati’s conditions. He ordered his ganas to find and bring back the head of the creature lying with its head facing north for the dead boy. They returned with the head of an elephant which Shiva placed onto the Ganesha’s body and instill new life in him. Shiva then declared Ganesha to be his own son, made him the leader of all the ganas. Thus Ganesha is known as Ganapati, -the foremost among the Gods.

The story of Ganesha focuses on the life’s important lesson that one should not be egoistic in life. Here, Jiva (human being) is represented by Ganesha – the one who is ego-bound and doesn’t recognize the Supreme Power. Filled with ego, Jiva at times ends up fighting with Him. Thus, it is the duty of the Lord to cut off the head of our ego. The Supreme Power then takes the form of the compassionate Guru to free Jiva from ego and find a way in His wisdom.

Popularly known as Vinayaka, Ganesha is the widely worshipped God in India. His birth date falls on the fourth day (Chaturthi) of lunar fortnight (Shukla Paksha) in the month of August or September (Bhadrapada). The famous Ganesh Chaturthi festival begins on the same day, and ends on the 14th day of the waxing moon period known as Anant Chaturdashi.

On this day, people bring home idols of Lord Ganesha and celebrate the festival following four main rituals - Pranapratishhtha (the process of infusing the deity into an idol), Shhodashopachara (16 different forms to worship Ganesha), Uttarpuja (prayer after which the idol could be shifted after its infusion), and Ganpati Visarjan (immersion of the Idol in a water body). It is on the tenth day of worship that the Lord Ganesha is bid farewell with due reverence by riding him out from home or colourful temporary shrines, in a colourful and musical procession, to a water body for immersion. During the festival, Ganesha is believed to absorb all the negativity in one`s household, and elevates one’s thoughts from mundane to spiritual.

This year Ganesh Chaturthi - the festival that solemnizes the birthday of Lord Ganesh - will take place on September 13, 2018 and celebrations will last for 10 days, with the biggest spectacle taking place on Anant Chaturdasi i.e., September 23, 2018.