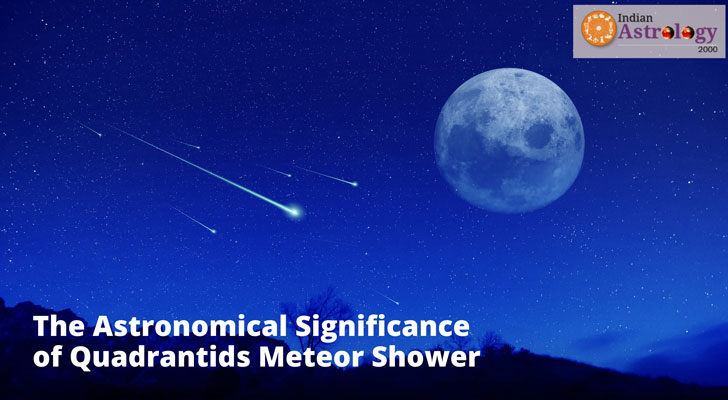 2021 witnesses the first major meteor shower of the year – Quadrantids. Today we discuss the astrological significance along with the impact that the shower will have on your zodiac sign based on moon signs in Vedic Astrology.

What is a Meteor Shower?

Meteors are chunks or debris of space rocks that enter our atmosphere and due to the pressure built in front of the meteors, they cause a spectacular show of light like shooting stars. These are known as meteor showers.
Astronomically we may witness as many as 112 meteor showers in total. Traditionally, since they are very small in size and have very less influence on us than the usual planets, they are not considered that significant in astrology. As per some astrologers, since this cosmic debris evaporate as they enter the earth, it should not have any impact on us.
However, the energy they create still has some potential effect on us especially by those meteor showers which occur on regular basis. Because these showers emanate from some constellations, they must have the characteristics related to that constellation and the event should have the related impact.

Also because even after the vaporization of the meteor, the matter they bring with them is assimilated by our earth and thus one cannot totally neglect the effects.
Astrological Significance - Meteor Shower January 2021

Science says that meteors are stardust and the origin of life is also connected with stardust. The stardust is a bunch of elements that supported life in primitive times on earth. The presence of elements that constitute life, in a meteor signifies its link and importance.
One of the major impacts which can be derived astrologically is the change and transformation just like that of any lunar or solar eclipse. They bring new energy and hope for looking forward to more exciting experiences.

Astronomical Event 2021 - Quadrantids Meteor Shower
The first major meteor shower that we can see in the year 2021 is Quadrantids on the night between 2nd and 3rd January in the northern part of the sky. Pre-dawn sky of 3rd January 2021 can be an excellent time in the USA to witness the show in the northern hemisphere.
Quadrantids is an above average shower where we can expect 30-40 meteors per hour near its peak time However, the peak will be extremely narrow in terms of the time. Also, the waning gibbous moon may hide the full spectacle.
Quadrantids meaning –
This meteor shower retains its name Quadrantids, from its original constellation Quadrans Muralis, which is now an obsolete one and not taken as a constellation anymore. The main brilliance or radiant part of this shower is taken near the brightest star Arcturus at the northern tip of the constellation Bootes.

Scientific astronomy states that the planet Jupiter has a significant role in the Quadrantids stream. Starting from the early research by W.F Denning and Mrs. Fiammetta Wilson in 1918 and then photographed evidence by S. E. Hamid and M. N. Youssef in the year 1963 proved that the streams parent comet was captured by Jupiter some 4000 Years ago and thereafter, the meteors developed on the path. (Reference: http://meteorshowersonline.com/quadrantids.html)

According to Ancient Greek Astronomer Ptolemy, meteors resulted in the action of Gods looking upon the curtain between their and our world.
For the constellation Bootes, Ptolemy suggested its characters like that of Mercury and Saturn and related the bright main start Arcturus with the characteristics of Mars and Jupiter conjunction. The famous Astrologer Alvidas, however, gave it, the qualities of Venus and Mercury.

Looking at the position of the constellation in the stellar sphere, In Indian Vedic astrology, and the Arcturus constellation can be considered as the nakshatra of SWATI. Swati is ruled by the demon head Rahu and is placed in the Libra sign ruled by Venus.
Effects of Quadrantids Meteor Shower 2021 –
The effect thus can be considered as a combined reflection of Mercury, Saturn, Mars, and Jupiter along with Venus and Rahu.
Ptolemy said that it may give prosperity from work and strong desires with interest in mystery and hidden science to those having born under the effect of this constellation.
Kabalists, however, associated Arcturus with the mercury oriented characteristics where they believed that the influence would be to take care of the wealth and treasure of the kings and ministers as a guardian of the people ruled by the king. In Greek philosophy, Bootes is considered as the protector just like Jupiter.
Considering the above correlations of various major planets and their impact on the constellation Bootes and association of planets with the event of Quadrantids, suggest that,

The intellect of the planet Mercury combined with the wisdom of Jupiter, courage from Mars, the prosperity and dreams from Venus can give a completely new transformation and structure.

Transit of Planets during Quadrantids 2021 –
During the time of Quadrantids showers this year in 2021, there are some significant transits of planets also.
War of ideology may divide the general public, governments, societies, and nations, and groups may seem to be forming. However, all this transformation will ultimately change the world for a new paradigm shift, and something more valuable and significant might come out of this churning.

The formation of meteor showers in the sign of Libra and nakshatra of Swati, the middle nakshatra indicates a balance of energies after some initial changes. SWATI is a nakshatra or godly star, which is moveable. It suggests a person who travels, who can leave the material attachments, Swati is also known as an ‘independent star’ which indicates independence in thought and deed.

Vayu the God of air element being the deity of Swati gives it a more flexible attitude of inquisitive nature The Nakshatra of Swati is of a changeable nature and denotes temporary changes and hence the activities related to movement like buying vehicles, going for a journey or some movement of temporary nature may happen in this period.

The Impact of Quadrantids on 12 Zodiac Signs –
Since the event of Quadrantids is due to the debris constituting the different elements, we can see their effect on zodiac signs related to that particular element.

As we know that all zodiac signs can be classified into 4 different elements of fire, earth, air, and water, the meteor shower will have different effects on these four sets of signs.
Quadrantids 2021 will bring in more fierce determination and you will have the time to follow your passion with full zeal. Do not let any temporary glitch lose your aim and keep working towards your ultimate goal and success will follow you. Competition in your professional life will be temporary so don gets afraid of it. You will come out as the ultimate winner and it’s time for action.

This event will bring you close to your luck and you will let your hidden potential come out of the closet. Believe your intuition and work accordingly. Also, your family will support you in your endeavors. Learn to take time out of your busy schedule and live the moments with full imagination. Being practical is good, however, every action needs some dream to start with. So believe in your dreams and try to live them.
These signs are generally very inquisitive and curious and love to take all information to analyze before stepping into any decision. This event of meteor shower wants you to remind that while calculation and intelligent planning is good for any project, overdoing it may tend you to lose some opportunities, and hence you must always be ready to grab any opportunity coming on your way. Sudden foreign-related projects may come in your favor and try not to keep on waiting and over analyzing them. Grab them as you get them.
The emotional and intuitive natives of these signs will have a very philosophical message hidden for them in these showers. For them, the message is to let go of what doesn’t belong to you and you must not linger on your past. You must learn to see the transformation of past events into something more meaningful and useful in your life. Believe that changes are for good and it’s our experience that makes us better at everything. So come out of your past and welcome anything new that comes into your life.
Likes this article? Find out more details on the latest astronomical events, transit of the planetary movements, or information on your zodiac sign based on moon sign.