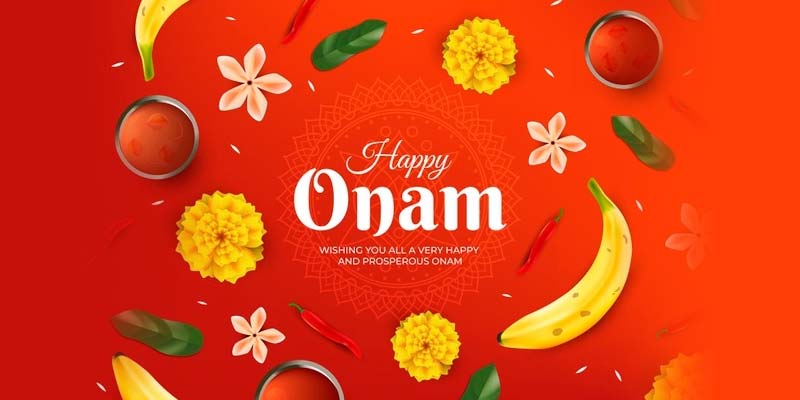 Celebrated widely among the people in Kerala, the festival of Onam is the most important one in the Malayali culture. It is the annual harvest festival of the Malayalis and it takes place in the month of Chingam (August-September), the first month of the Malayalam calendar, and lasts ten days. It is primarily a Hindu festival and has its roots in Malayali-Hindu Folktales.

The celebration of Onam occurs with the celebration of Thiruvathira and Vishu. This festival takes place in different regions of Kerala to commemorate the great King Mahabali. People on this day, worship to the Gods with the belief that Mahabali’s spirit will visit Kerala meanwhile the festival of Onam is celebrated to bless the city.

For centuries, Onam has been a part of Malayali culture, records of Onam celebrations dating back to the Sangam era. Earlier Onam was celebrated throughout the entire month of Chingam. Chingam is a welcome month for people in Kerala after the rainy month of Karkidakam, which brought with it many struggles and hardships related to extreme rainfall.

The festival heralds the beginning of harvest season in Kerala. It symbolizes the season's renewed vigour and excitement, and it's celebrated with traditional fervor, including temple visits, family get-togethers, gifting each other Onakkodi, and plenty of merrymaking.

In 2021, Onam will begin on August 12 and will end on August 23, with on-going festivities celebrated for 10 days.

Legend behind the celebration of Onam:

The legend is with the story of King Mahabali or Maveli and Lord Vishnu's avatar or incarnation of Vamana.

King Mahabali, was a very efficient, generous and popular Asura King. His kingdom spanned the earth (prithvi), under-earth (pataala) and reached to the skies. Since, the gods were worried of Mahabali's rising popularity, they requested Lord Vishnu for help. Vishnu, took the avatar of Vamana and appeared before the generous king Mahabali, for a piece of land only 3 paces of his feet.

When granted the wish, Vamana grew so big in size that with one step he covered the earth and with another the heavens. King Mahabali, on learning the trickery of the Vamana, offered his head to save the people of Kerala. Impressed by the King's love and philanthropy towards his subjects, the Vamana granted him a wish to visit Kerala once in a year to find that his people are happy and prosperous. The day Mahabali comes to visit his people is known as the festival of 'Onam'.

The festival of harvest, Onam is observed with great pomp and vigour for ten days in Kerala. Some rituals and celebrations that take place during these 10 days are as follows: