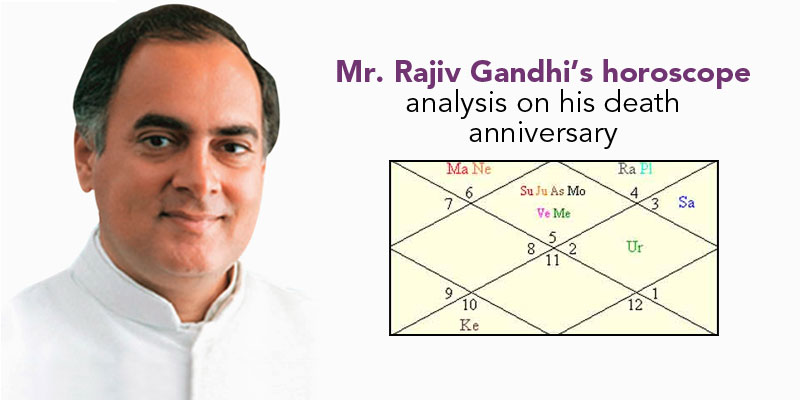 This is the article about our former Prime Minister Mr. Rajiv Gandhi in which, we will try to evaluate his assassination through astrological analysis.

Mr. Rajiv Gandhi was born in Mumbai on 20 August, 1944 to Mrs. Indira Gandhi and Mr. Feroz Gandhi. He was shy and an introverted child, and greatly enjoyed activities like drawing and painting, as quoted by his teachers. He went to London and Switzerland for his school and college education and came back to India in the year 1966. In the year 1968, he married Sonia Gandhi and they settled in Delhi in a smooth domestic life with their children Rahul Gandhi and Priyanka Gandhi Vadra. Mrs. Indira Gandhi became the prime minister in the year 1980 and till this point of time, Rajiv Gandhi had no inclination towards joining the Indian politics. He joined politics in the year 1981 after the death of his brother Sanjay Gandhi in an air crash and on the insistence of congress party and Shankaracharya Swami Shri Swaroopan, a saint from Badrinath, to join politics and serve the nation.


Some facts disclosing the longevity or lifespan of any horoscope-

- Mr Rajiv Gandhi’s Ascendant is Virgo and Moon sign is Leo and his personal planet Mercury is the lord of the ascendant and is placed in the 12th house, which gives low strength to his ascendant.

-The lord of the ascendant Mercury is hemmed between two malefic planets, Mars in the ascendant and Rahu in the 11th house. It reveals that he was a boy with golden spoon in his mouth as he was financially secure but the upheavals in his family forced him to join politics which was not his personal choice.

-Mercury, which is also the lord of the 10th house of status, gave him the good strength that he became the prime minister of India, even if enforced naturally by circumstances.


Rajiv Gandhi’s 8th house analysis reveals many important factors which brought him in politics and led to his sudden assassination:

-The lord of the 8th house is Mars, which is posited in the ascendant and makes his self strongly susceptible to accidents or assassination by his rivals as the lord of longevity in his birth chart is weak in degrees.

-Malefic hemming of ascendant lord Mercury in between Mars and Rahu and 8th house lord Mars is hemmed between Rahu and Ketu axis.

-The significator of longevity Saturn [Ayushkaraka] is posited in the 10th house of status and career has fair strength in Gemini sign, which may be the reason of his sudden appointment as the prime minister of India.


Strength of Moon in his birth chart-

Moon is the lord of the 12th house and placed in the 11th house of gains. In his horoscope, the location of Moon has fair strength but it is posited in the 12th house, which gave him the power of the country through ancestral handing of power. However, it also transferred the negative brunt of his family rivals for power as Moon is hemmed between malefic Mars and Rahu.

-Moon also had fair share of blessings of Mercury, Jupiter and Venus which gave him the wisdom to rule the country wisely and he was famous as a good human being in the public eye.

- This placement in his horoscope was not beneficial for Rahu in the 11th house. Mars in the 1st house and Ketu in the 5th house and again Saturn in the 10th house were not good combinations for longevity in any horoscope, as the nervous system is a vital part of the working of the human body.

-Venus the lord of the 2nd house and Jupiter the lord of the 7th house, which are the Markesh house [bad period] can cause accidents or death, inflicting damage and he lost his life at the hands of his rivals.

He left for his heavenly abode on 21st May 1991 as his  D-9 chart [Navamsa chart] indicated the close proximity of Mars and Ketu in the 7th house. It indicates that Ketu absorbs all the negative energy of Mars and it is said “Kujavate Ketu” that is Ketu acts like Mars. So Ketu had become fiery like Mars and it promoted such circumstances that the suicide bombers were used to assassinate Mr. Rajiv Gandhi, which was a brutal act and not at all appreciated by any human emotional instinct. Loss of Rajiv Gandhi was a major blow to our nation.